The most powerful behaviour model ever

When something goes wrong what is your natural reaction?

Our behaviour responses are so beautifully captured in the acronym 'OARBED' - the OAR (Ownership, Accountability and Responsibility) representing above the line behaviour while BED (Blame, Excuse, Deny) is below the line.

This concept is easily demonstrated through the child's mind.  For example, perhaps your children have been playing a little too quietly and on investigation you discover an entire jar of marmalade has been spread on the white walls of your children's bedroom.

You immediately ask John (who is six and a bit of a ring-leader) if he is the perpetrator.  John's first response is denial; 'No it wasn't me'.  So you ask Jane (who is four and giggling to herself - although she is younger, she's a bit smarter).  She uses another below the line response (blame) and says 'It was John', hoping he'll get in trouble and she'll retain her status as Daddy's pet.  So you allow John a chance at rebuttal and he fires back an excuse; 'Jane told me to do it', which reinforces Jane as being pretty clever as she can have fun with John AND get him in trouble at the same time.

John and Jane are just kids.

It is not until John and Jane grow up that they'll learn that below the line behaviours (Blame, Excuse and Deny) are not acceptable, nor rational or advantageous because if you get caught spreading marmalade on the walls you'll have to suffer the consequences.  Throwing your sibling under the bus will only add resentment and the loss of an ally to the punishment.

As adults, when something goes wrong naturally our first thought is often below the line.  However, we are better off in the long run to behave in an above the line way.  To accept responsibility and take ownership and be accountable for our error.

Of course, we're not very likely to get these above the line responses from John or Jane:


I believe this is the most powerful behaviour model ever.  No matter how old you are or what your situation is, your long term results and relationships will be 100 times better if you act above the line.  You'll build trust, respect and enduring relationships.  Also, if you teach this model to your children, your friends and your workmates, you'll build lasting relationships and an impressive work culture.

When we are operating below the line we are being a victim.

OARBED teaches us that, when we're operating below the line and being a victim, we are not in control.  Responses spring to mind like 'I should', 'I could' or 'I might' - a below the line response comes from a place of fear.

On the contrary, when operating from above the line we are the victor and we are in control.  Our responses will be 'I will', 'I can' and 'I must'.  An above the line response comes from a place of courage. 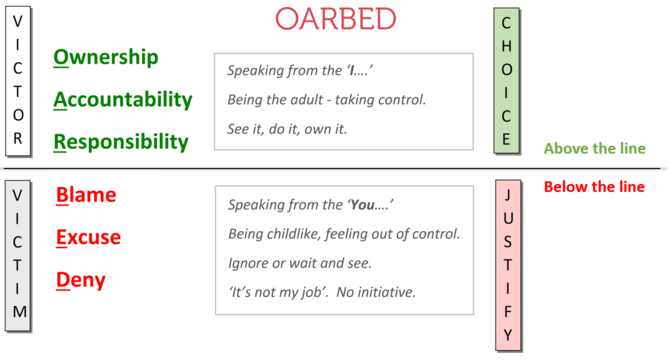 selling experiences and as a result shy away at every sales opportunity.  They know that their clients need help to improve their profit, their wealth and cashflow and that a great  do this  working on .
The BED responses will be something like this:

It's easy to stay in BED; the powerful response is to start paddling with your OAR.  As they say; no pain, no gain - for you or your clients.

About the author Mark Jenkins, CA